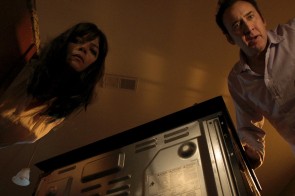 From the director of Ghost Rider: Spirit of Vengeance (2011). With a Nicolas Cage who slowly and ludicrously slithers across the screen (as is his wont) and a Selma Blair we’ve loved since Legally Blonde (2001) or Hellboy (2004), this movie released with malice, nocturnality and total premeditation in Toronto’s Midnight Madness section is a rampant and marvellous attack on morality. There’s not just something about Mary, but about all of the local mummies and daddies: they’ve suddenly taken to killing their offspring in any way imaginable (catch the opening scene, a perfect declaration of intent). Stylishly driven yet without concessions, fun and sometimes lyrical and critical, it provides the answer once and for all to the old question of “Who can kill a child”?