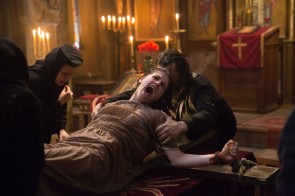 From the adored director of Frontière(s) (2007) and The Divide (2011), a magnificent legionnaire who can be found just as easily filming in France, in Spain, or in the UK, this movie shot with lighting devised by Daniel Aranyó, cinematographer of Biutiful (2010), penned by the authors of Expediente Warren: The Conjuring (2013) and produced by the folks who gave us Annabelle (2014), is brought to us from the land of Dracula, Mungiu, Puiu and Herta Müller. Investigation into an exorcism which ended with the crucifixion of a nun; many were those who wrote of its anchor in the self-same father Karras.