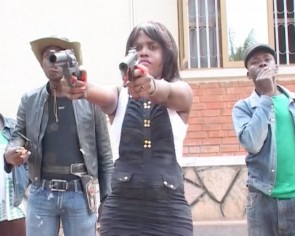 When we already new that Bollywood was the world leader of film production. When we were already perfectly aware that the second in line wasn’t Hollywood, but Nigeria’s unstoppable Nollywood, where 1,200 movies are filmed every year, we were enraptured to discover the existence of Wakaliwood, another territory of movies made with speed, nerve, short-temper and heaps of spirit. Wakaliwood! We’re in Uganda. In its capital, Kampala. In its suburbs, Wakaliga, and we’ve got Africa’s Tarantino, Nabwana Isaac Godfrey Geoffrey, shooting brutal flicks willy-nilly. They’re making one about Ebola. And this one where there’s dead folk, gunshots, signs over the screen, a bilingual narrator and a good deal of cheek, which triumphantly ventured to Seattle and Austin.