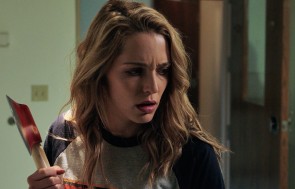 From the producers of The Purge (2013) and Get Out (2017), Death frankly sits very well with the leading lady, who has an (unlimited?) number of lives and infinite ways of solving her own murder. A macabrely humoured review of classics like Groundhog Day (1993), Scream (1996) and Final Destination (2000). The director already brandished his weapons as a knight of horror in Scouts Guide to the Zombie Apocalypse (2015) and his The Marked Ones (2014) instalment of Paranormal Activity. The screenwriter penned X-Men: Days of Future Past (2014) and we discovered Jessica Rothe (what a brilliant scream queen!) in La La Land (2016), while Susan Seidelman had already trusted in her much earlier for The Hot Flashes (2013). And in case you have any doubts: in the USA it was released on October 13th. Which fell on a Friday.