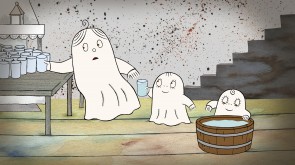 Laban, a little ghost, lives with his family in Morningsun Castle. He wants to frighten people like his father, but fails, no matter how hard he tries. The Castle is occupied by a royal family, and the young Prince Mischief, with his little dog Rufus, are Laban's best friends. What's most important is that our little ghost is afraid of the dark.