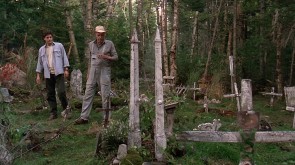 In a particularly Kingsian period in American film-making, which saw a number of successful titles based on Stephen King books –Children of the Corn (1984), Stand By Me (1986), The Running Man (1987), Misery (1990)– in this film the writer adapted his own novel. Pet Sematary is directed by Mary Lambert, maker of some of the most celebrated Madonna videos and of the feature film Siesta (1987), shot in Spain. A well-off couple with two children moved into a house next to a busy road. When the family cat is hit by a car, they decide to take her to a nearby pet cemetery. Legend has it that the place was a former Indian burial site where everything buried there comes back to life.