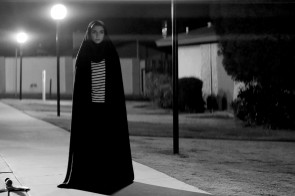 In the Iranian ghost-town Bad City, a run-down area crawling with prostitutes, drug addicts, tortured souls and losers of all types, a creature stalks her victims in search of blood. Everything changes when boy meets girl. This vampire Western-cum-cult movie, a love story with the spirit of a graphic novel, a black and white horror film set in a fictional Iranian town but shot in California, has become a genre surprise in recent years. This was the first feature film by Ana Lily Amirpour, who this year presents her movie The Bad Batch (2016) in festivals around the world.