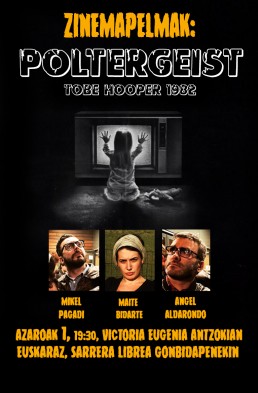 We'll screen the classic Poltergeist and, like the "film comments / director's comments" shown on DVDs, after the screening we'll talk about the movie, sitting with the audience. Who are this year's zinemapelmak? Mikel Pagadi, Angel Aldarondo and Maite Bidarte. The three, with experience as screenwriters as well as in television and short films, are above all incontrovertible fans of this film.

Bearing in mind that this is the first time the initiative has taken place at the festival and that we're in 2017, I thought this was a great chance to screen Poltergeist. On the one hand, because it's hearty, because almost all of us have seen it and because it offers plenty of interesting things to talk about, thanks to its popularity and on the other because we want to pay a well-deserved tribute to the director, Tobe Hooper.

We recommend that the audience watches this film at home before coming along to join in, because me may just "throw a spanner" in the screening...