The Final Girls present WE ARE THE WEIRDOS 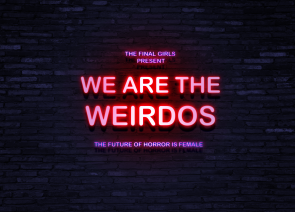 The Final Girls is a London-based film collective exploring the intersection between horror films and feminism which aspires to further the representation and work of women in the genre, both before and behind the camera. Here they present an anthology of short films directed by women.

A teenager fights daily against upsetting urges and compulsions.

A woman encounters something strange and terrifying on her way home one night.

Determined to lose her virginity, CJ plans a seduction.

A young girl seduced by a circus troupe finds herself in danger.

Supernatural morality tale about a married man looking for an online tryst.

A killer stalks a young woman and her friends in this homage to 80s horror films with score and cameo appearance by John Carpenter.

A tale of karma drenched in blood.

Charlotte curiously observes the disagreeable behaviour of the men who frequent her late night diner.

A socially awkward university student begins to experience an obvious physical deterioration after a frat party.