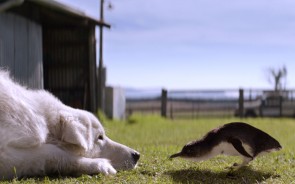 In Middle Island, Australia, a small colony of penguins has set up its home. But for some time now they've been under threat from a variety of wild animals, particularly foxes, whose attacks have sent their numbers spiralling downwards in recent years. Helped by his granddaughter, an eccentric farmer named Swampy decides to train his dog Oker to protect the penguins from their predators and thereby save the little sanctuary. A story based on true events.