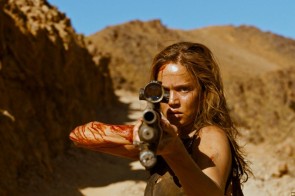 You’re stinking rich. It’s dirty money. Of course. But there’s lots of it. You have two sidekicks with darkest of dark souls and fully loaded rifles. A second mansion. Scandinavian architecture set in a never-ending desert. And, it goes without saying, a mistress. And, logically, you’re bushed. Until today your lover was nothing but a bit of skirt, less than a Playboy bunny. What you don’t know is that you’re in a movie directed by a woman, a Parisian with a degree in Political Sciences who’s hellbent on trapping you in what could be a godless combination of Kill Bill (2003-2004) and Deliverance (1972). You’ve been warned. There’s so much blood that the folk at the special effects department ran out of the stuff. Oh yeah, your girlfriend comes in the shape of Matilda Anna Ingrid Lutz.