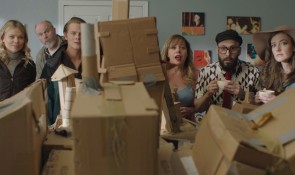 The audience at the indescriptible Boston Underground Film Festival had no second thoughts in crowning it as their favourite. In March, the Chicago Sun-Times wrote that it was “weird, creative, inventive, compelling, good and gloriously goofy”. At this point in 2017 all fantasy aficionados know that this is a cardboard origami experiment taken to the extreme for 80 sumptuous minutes. Dave has built a maze in the living room. And now he’s lost in it. Let’s go and rescue him! Ignore the monsters, the booby traps and the blood (fake, but you seem to be dead anyhow). The soundtrack is by the Mondo Boys, addicts of pasmo rock since Medicine for Melancholy (2008).