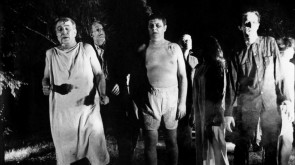 One of the great all-time movie classics which opened a new era in horror films and shed light on a new sub-genre, that of zombies, which seems to gain in popularity every year. Radiation from a satellite brings the dead back to life and they start to rise from their graves. It all starts in a cemetery, where two siblings are attacked by one of the revived. She dies and he flees to a farmhouse, where he meets other people in the same situation. They must defend themselves from attack by a horde of zombies. Master Romero began his career with this title which enjoyed unexpected success in its day, going on to make another five versions of it in his filmography.

With the collaboration of the Horror and Fantasy Film Festival