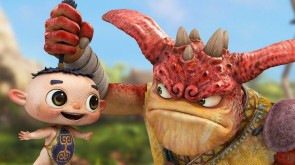 Far out at sea, surrounded by mist, is a mysterious island said to be the home of a family of monsters. It’s forbidden to go near it. But one day a human child gets lost and ends up coming face to face with the mysterious creatures who live there. His arrival sends waves of panic through the island, because in fact it’s the monsters who are terrified of humans.