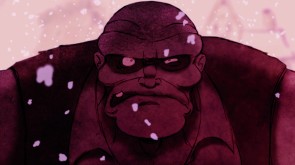 In the 18th century, Prosper Thanatier, the last in a long line of executioners, carries out his trade, which he considers an art, with great passion. On the eve of the revolution, Prosper is forced to abandon his tools and his ancestral know-how and start using a new gadget for his executions. Deprived of his earlier form of art, Prosper does not know how to adapt to "progress" and refuses to accept that his role as executioner is simply a matter of a machine.