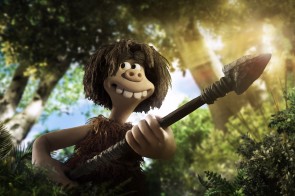 Set in prehistoric times, this is the story of our plucky hero Dug, a caveman who lives in a prosperous valley with his best friend and sidekick, Hognob, and other eccentric and adorable members of the tribe, led by Bobnar. While the ambitious can-do Dug delights in hunting mammoths and having adventures, Bobnar is happy to stick with his tribe, leading a simple and easy life hunting rabbits. But the peace comes to an abrupt end when their valley is invaded by an enemy like nothing they've seen before, in the shape of the pompous Lord Nooth, governor of the Bronze city, and his army. Lord Nooth, a money-loving tyrant, has discovered bronze in the tribe's beloved valley and invades it using an army complete with armour-plated mammoths, forcing the cavemen to flee and seek shelter on the bleak plateaus.