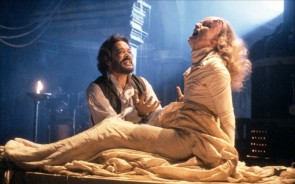 New Los Angeles, in the year 2031. A scientist is working on creating a new weapon. These experiments lead to different weather alterations in the atmosphere, and finally a crack in space and time that takes the researcher back to Geneva in the year 1817. The first person he meets in Doctor Victor Frankenstein, and then his monster, who vehemently begs him for a mate. He then meets young Mary Godwin (and Shelley afterward). The novel and the story intertwine in this frenzied adaptation of the novel by Brian W. Aldiss, directed by the legendary Roger Corman.