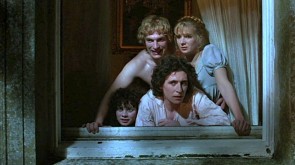 Back in the summer of 1816, on the shore of Lake Geneva, Lord Byron, Percy Shelley, Mary Wollstonecraft Shelley, her half-sister Claire and Doctor John Polidori all met for a few days in Villa Diodati. The tale of Frankenstein or the Modern Prometheus was spun in the evenings by Mary Shelley, and The Vampire, by Polidori. The story has been retold on several occasions in book –Bravoure, by Emmanuel Carrère– and in film –Rowing with the Wind (1988), by Gonzalo Suárez–. In 1986, British filmmaker Ken Russell decided to tell the world his own version of the story, excessive, sometimes verging on delirium, always personal and his very own.