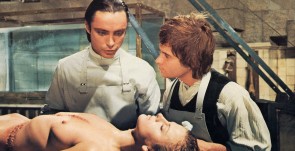 Paul Morrissey directs this freely-interpreted version of Mary Shelley's novel (who isn't even listed in the credits). Baron Frankenstein and his wife (and sister) live in a castle, along with their two worrisome children. The baron's dream is to create a race of superhumans, based on select parts of cadavers. In his laboratory, he works to bring the perfect man and woman to life, so they can reproduce and create the race of the future. A strange, cursed, dark and turbid film, shot in Cinecittà by Morrisey, with the collaboration (to a greater or lesser extent, depending on the source) of Antonio Margheriti and starring Udo Kier and Joe Dallesandro.