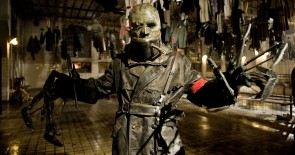 During the final death rattles of WWII, a Soviet command penetrates German territory in search of a group of missing fellow men-at-arms. In a mysterious village, the discover a laboratory belonging to a Nazi scientist. Following Doctor Frankenstein's diary, he has used pieces of dead bodies and metal to create (almost invincible) monstrous beings to change the outcome of the war. The Soviets have to summon all their strength to face off against this zombot army threatening the world. The first feature-length film directed by Dutchman Richard Raaphorst, he also designed the film's monsters and worked in the art department for some of the first films by Yuzna and Gordon for the Fantastic Factory.