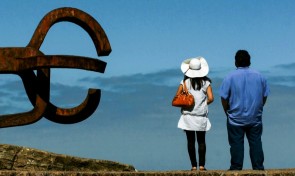 A Japanese tourist asks a man for directions to the Guggenheim Museum, thinking she’s in Bilbao. But they’re not in Bilbao, they’re in San Sebastian, opposite the Kursaal. The two laugh at her huge blunder.

To celebrate the 150th anniversary of diplomatic relations between Japan and Spain, in 2018 the Japanese Embassy in Spain, in collaboration with the ICAA, organised the 1st Short Film Competition entitled Japan and Spain, 150 years. Participants had to highlight the cultural influences shared by both countries, or any aspect relating them in a work of less than 5 minutes. The jury members were Pablo Berger, Yuko Harami, Esteban Crespo and Javier Yáñez. These are the three winning shorts.