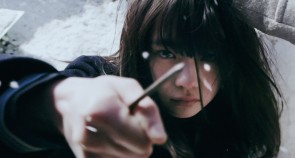 Like Inuyashiki (2018), this steely, snow-covered, bloody and incendiary movie was also initially a manga. Misu Misou was its original name and it was signed by Rensuke Oshikiri. Like in so many other Japanese movies, we once again run into handfuls of schoolkids with an astonishing love of making out like they’re pure psychopaths and a total desire to take the bullying of their new classmate beyond the point of no return. It’s no longer a question of chucking a dead crow into their school desk, but of burning down their house. Meanwhile, among the blood and the stench of burned flesh, in a field grows a Hepatica nobilis (liverleaf), a flower with no fear of the winter. Meantime, the victim may just learn to become an executioner. The film was screened, to great acclaim, at the New York Asian film festival.