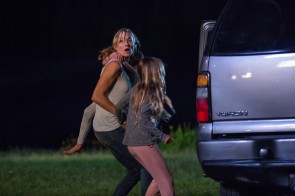 Closing ceremony with a murderer of bandaged face and firmly-held axe who, as dictated by the diabolical norms of horror, is never where you just left him conscientiously slashed to pieces. Though helmed by Quinn Lasher, on the networks they ask if it’s not a pseudonym, since they always claimed that it was to be signed by Dennis Iliadis, author of the sophisticated The Last House on the Left (2009). Whoever the maker, starring the Yvonne Strahovski of “Dexter” (2006-2013), it has already been tried and tested at Glasgow’s Frightfest, showing remarkable skill at scaring the two little girls and their mummy as they wait for daddy in a forest cabin. You could even see it as a salute to responsible motherhood. And, as usual, better not eat those little cupcakes someone has left out on the forest table.