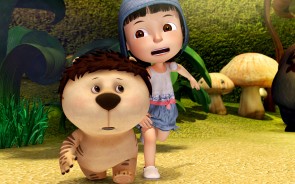 After an argument with her father, the brave little Yugo runs away from home to a fantastical world in the clouds inhabited by animals. There she meets her old friends Lala and Uncle Bear. But things have changed and the place is in peril. According to an ancient prophecy, the water supply will run dry and the inhabitants will shrink in size, and it's starting to happen. The three friends, helped by the local leader, Mr. Potato, set out to save the kingdom in a fantastic adventure where they will have to overcome all sorts of dangers.