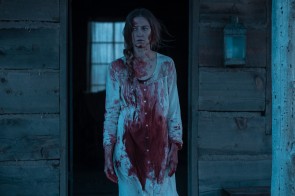 New times and manners for a greatly loved genre, the western. After The Hateful Eight (2015) we now have The Rider (2017) and The Sisters Brothers (2018). Here we have the offering from a new and very capable girl, Emma Tammi: one about cowboys with terror; the purest of horror-western exercises with a screenplay by another seriously gritty woman, Teresa Sutherland. Together, in the company of a splendid actress, Caitlin Gerard, who played in Walter Hill's The Assignment (2016) and in the last Insidious: The Last Key (2018), they join forces to tell us a story of borders and loneliness, creating a person skilled with the needle and fast with the gun. A pioneer whom only the dark forces floating on the lonely edges of the wild and Far West dare to take on.