"The Legacy of Mary Shelley" cycle at the Horror Festival 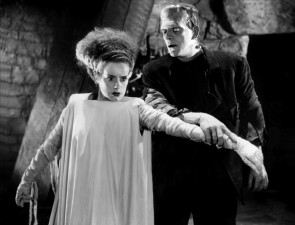 In 2018 it will be 200 years since the publication of Mary Wollstonecraft Shelley's novel Frankenstein or the Modern Prometheus, planned a couple of years earlier during the famous soirée at Villa Diodati which has been recreated several times in film and literature. The Festival wants to pay tribute to this horror myth with the poster and with a retrospective season.

The monster created by doctor Frankenstein, his bride, the author herself, descendants and several followers of the scientist have played the leading role in more than a hundred films over the years. From the cutting-edge versions by J. Searle Dawley (Frankenstein, 1910) and Eugenio Testa (Il mostro di Frankenstein, 1921) to the recent Mary Shelley (Haifaa Al-Mansour, 2017), the novel by the British writer has fascinated filmmakers of all times.

The versions are myriad and hugely varied. The Festival will screen some ten films on the subject the character on the 200th anniversary of his birth, also selecting the said diversity of approaches. It goes without saying that Bride of Frankenstein will number among them.