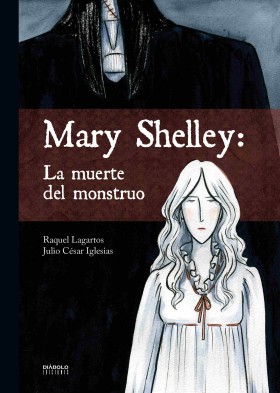 The year 2016 marked the 200th anniversary since the most famous literary reunion of all time. At Villa Diodati, under an ashen sky, Mary Shelley began writing a story that would change the face of monsters forever.

Mary Shelley: La muerte del monstruo is a story about the life and death of the creator and her creature. Based on the Victorian fascination with death, and the dark enthusiasm awakened by the possibility of using science to revive cadavers, the comic addresses Mary Shelley's complex psychology, marked by an ill-fated life. At a time when doctors were entitled to dig up any body, and families of the dead kept watch in cemeteries, Mary Shelley forces us to wonder about the true identity of Frankenstein's creature. Where does the creator's mind begin, and where does the monster's end? Who survives death?

Julio César Iglesias is a historian and scriptwriter. Raquel Lagartos is a sketcher and illustrator. They have published two graphic novels together: Mary Shelley: La muerte del monstruo (Diábolo Ediciones in Spain, Edizioni Piemme in Italy) and La hierba del estío (Diábolo Ediciones), and have participated in the collective work Frankenstein resuturado (Ediciones Alrevés). They are currently preparing their third work.