The exhibition "Munstro Maite" is open at Kutxa Kultur Plaza 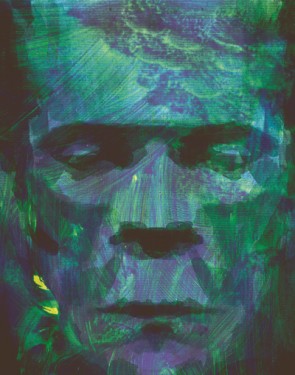 The exhibition Munstro Maite will be open between October 24th and November 25th at Kutxa Kultur Plaza (Tabakalera - 4th floor).

"You look into his eyes. They've told you that he can rip off limbs like matchsticks, but you're not afraid. They've told you that he lies in wait for dim-sighted old folk. You wouldn't think so. You know, from what you've heard, that he almost drowned a poor girl in the river. But no, he doesn't look like a monster. You look back into his eyes. They're closed. He's looking inwards. Maybe you don't think he looks like a monster, but he's all too aware of the fact that that's exactly what he is. He knows what he's done. He's got that sort of pop look that's made him famous, much more than the torture, the mystery and the sensitivity of the romantic poets who helped bring him into the world. Lucia's Frankenstein isn't the monster you were looking for. He's not something to laugh at or run away from, or someone you want to kill. He's the monster you understand. He's the monster you love. He seems to be deep in a storm perhaps raging at the bottom of the sea. And yet there he is, contemplative. Ignoring your judgement. He doesn't want you to come near him. It's for your own good".