The exhibition "Through the Looking-Glass" is open 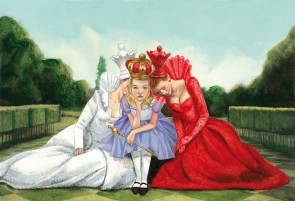 The exhibition Through the Looking-Glass – Illustrations by Fernando Vicente will be open between October 23rd and November 30th at the FNAC.

Through the Looking-Glass is the second part of Alice in Wonderland, a work written by Lewis Carroll six years after the first. While it snows outside, Alice plays chess with her kitten Kitty, wondering what life would be like on the other side of the looking glass hanging on the living-room wall. She'll be surprised to find that she can actually go through it. Another game of chess awaits her on the other side. This time she'll play by her own rules: there flowers speak, unicorns fight with lions, time goes backwards...

Everything is possible in the back-to-front world, a world captured by Fernando Vicente (Madrid, 1963) in images, recreating with great beauty what is only possible in Lewis Carroll's imagination. He started working as an illustrator in the early 80s, collaborating with the defunct magazine, Madriz. He won the Laus de Oro illustration prize in 1990. He assiduously collaborates with the cultural supplement Babelia coming with the daily El País, from which he shows his most literary work every Saturday and where he has gradually fashioned his current style as an illustrator. This work earned him three Awards of Excellence from the Society for News Design. For the Nórdica publishing house he has illustrated, among other works, Poems for the Skies, The Communist Manifesto and A Study in Scarlet.