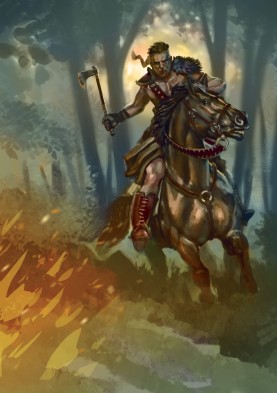 Patri de Blas and Álvaro Corcín are musgo, an illustration and design studio based in Pamplona from which they aim to fill bookshelves with illustrated books, containing tales and stories where magic and fantasy play the leading parts.

Through the illustrations, in the exhibition they will show us the worlds of Pequeños detectives de monstruos, Los Buscaduendes and Rising for the Throne, as well as a series of illustrations belonging to other fantasy universes drawn from their imagination.

From musgo they succeed in bringing fantasy to the youngest among us with works like Pequeños detectives de monstruos (published by Nosolorol), a role-playing game for boys and girls aged 3 and over where they have to find clues to discover the monster who's causing problems; a game which will help them to overcome their fears and manage their emotions while playing.

Or Los Buscaduendes (Nosolorol) where the participants play the role of children who live between two kingdoms, those of witches and wizards, helping those who need it and solving mysteries between magical creatures.

Rising for the Throne (Txarli Factori) is a dice and card game where the players compete to beat the other clans to the throne. All of the graphic material has been designed and illustrated by musgo, representing characters such as knights, warriors, beasts and dragons.

Welcome to the fantasy world of musgo, because the places where you find moss, like castles, menhirs and enchanted forests, still have an aura of magic which remains alive in our world, with fantastic creatures and legends that are just waiting to be given shape, and at musgo they want to illustrate and show them to all of us.