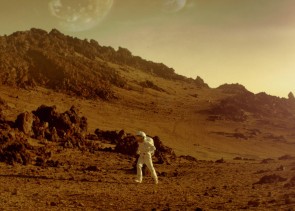 An astronaut lands on an unknown planet. A mysterious French voice over (produced by the actor Féodor Atkine) speaks, to him and/or to the spectator. Maybe he hears him, maybe not. The spaceship is a wreck. Where has he landed? Where he was meant to? Far from it? But maybe that's not what's really happening. Short in several keys directed by Madrid's Martín Rosete –Revolución (2002), A falta de pan (2005), written by San Sebastian's Luiso Berdejo –co-writer of the screenplays for Painless (2012) and [REC]³ (2012), among others– and produced by the lehendakari of the Spanish short film, Koldo Zuazua.