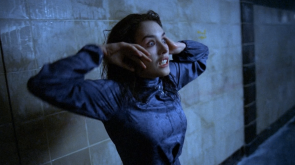 One of the biggest European horror films of the '80s. Born in Poland before emigrating to France, Andrzej Zulawski directed this disturbing film set in West Berlin, starring Isabelle Adjani (who won the best actress at Cannes and the Cesar that year). Marc returns from a trip to find his wife has changed and is very nervous, like a different woman. She admits that she is having affair and moves out, and Marc is one step away from having a breakdown. He decides to hire a private detective to follow her and uncover her secret.