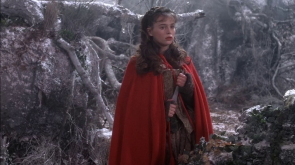 Based on the short stories by writer Angela Carter, Irish director Neil Jordan directs one of the best fantasy movies of the 1990s. A journey through the dreams of teenager Rosaleen that begins when she witnesses a pack of wolves devouring her sister. From this point forward, everything takes place in a world halfway between reality and fantasy, between the past and the present, where her grandmother, after giving her a red cloak that she has woven by herself, tells her stories about men whose eyebrows meet in the middle that turn into wolves after nightfall.