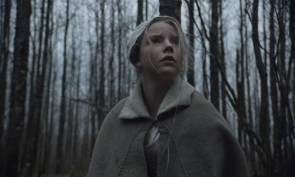 New England, 1630. An English settler and his wife with strong religious beliefs live with their five children near a forest which, according to popular belief, is inhabited by evil. All the other families have moved away from the place, frightened by the strange unexplained phenomena in a still virgin land that they attempt to settle into as their home with all their might. A dark and telluric film where bucks stand on their hind legs and where mysterious forces coming from the forest or beyond dictate the laws that govern the fates of those residing there.