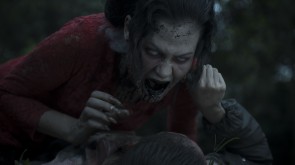 The independent survival horror videogame genre film developed by Digital Happiness. Directed by Kimo Stamboel, who cut his teeth with Macabre (2009) and Killers (2014). An Indonesian and South Korean co-production. Its opening is cool, involving a group of teenagers who decide to enter an abandoned building and gain more popularity on social networks. We suspect that they will pay a high price for this. Because as happens very often, someone will open the door of communication with the Other Side. So it's just as well that the protagonist wields the latest Smartphone as well as not being adversely affected by being continuously immersed in nebulous waters, also keeps the undead in check. Could this be a special app? Will it be on offer with the Festival ticket?