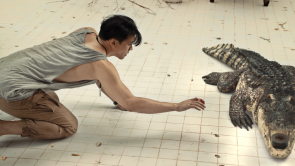 We initially thought that Thai cinema revolved around two names that we really admired, Apichatpong Weerasethakul, winner of the Palme d'Or in Cannes in 2010 with his film Uncle Boonmee Who Can Recall His Past Lives; and Tony Jaa, the great martial artist. We then got to know its Muay Thai horror films a little better and here we are today, stranded in a swimming pool that has no water, with our girlfriend with a head injury beside us while a crocodile is close by. There is also a dog tied up on the diving board. A survival film. Because to top everything off, you are diabetic, the mutt has eaten the pizza, and it is starting to rain. Its director, Lumphapleng, has already won awards in Austin and Brussels and its protagonist is a major star back at home. Interesting fact- the crocodile and the dog are generated with CGI.