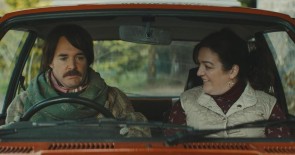 Driving school instructor. Irish. Getting on a bit. She has been left on the shelf. Mostly because of her father, a paranormal researcher who we only catch a glimpse of a few cathodic old images. She had (has?) powers. Of course. She sees the dead. And sheet-covered ghosts in the street. She hasn't offered her supernatural powers for a long time. But suddenly a widower who takes a fancy to her, signs up for her driving lessons. And then things start to happen. A hilarious, refreshing Irish-Belgian co-production, which apart from referencing Irish fantasy, also exudes a sense of surrealism that we associate with the country of Magritte and Tintin.