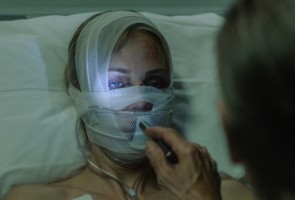 Only they could have considered producing a remake of Cronenberg's Rabid (1977), which they described just before it made its début in London as a "continuation of the thoughts and conversation" that were started with the great classic. They are the one and only Soska sisters! Our favourite twins who brought us American Mary (2012), hardcore fans of grindhouse, Hitch and Eli Roth. Alongside actress, Vandervoort, from Saw VIII (2017). Who swore that they made Rabid "from a female perspective". And this is no lie. Jen, Sylvia and Laura's story is told through Rose and Cronenberg's tragedy is replaced with fury. Attention is given to both grand surgical scenes, as influenced by Dead Ringers (1988), as well as the personal.