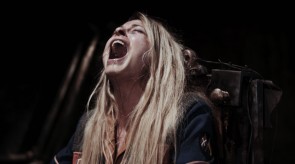 We present two names that you won't forget in a hurry. One is up-and-coming director, Søren Juul Petersen, who has been involved in film making for 20 years. His directorial début has taken Glasgow, Brussels, Russia and other festivals by storm. And the other is Steen Langstrup, widely considered as the Danish Stephen King. This film is based on one of his films that takes place in the dark of night where the football team from this country that has brought us Hamlet and Von Trier is playing in a grand finale. Everyone is watching it on television and two girls, manning a petrol station in the middle of nowhere where nobody will turn up... or maybe yes? No, that is not exactly what it looks like because there is also a well of torture and a perverted master of ceremonies.