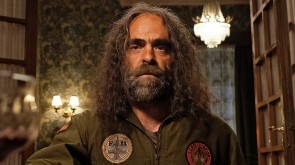 If Antonio Orejudo, writer, tells you that his book is a "conspiracy thriller half way between the worst type of perversity and mystery-shrouded darkness", take him at his word, as he is not one to mince his words, and he does not do reality, even if paranoia is involved. If the director mentions that the film "navigates through a range of genres in a very organic way", also believe him, as Aritz Moreno is one of our own. Just like the producer, Leire Apellániz. If they say that everything kicks off when the man sitting opposite you in the train asks you if you want to hear about his life, say yes. This is one of the advantages of travelling by train... on the way to Sitges, where the film is coming back from to bring the Festival to a close.