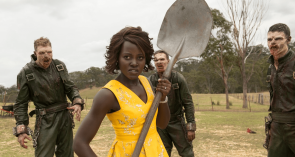 This could very well have been the poster image if it didn't already have the one it has: Lupita Nyong'o, the Mexican-Kenyan semi-goddess who starred in 12 Years a Slave (2013) and Black Panther (2018), dressed in a sleeveless short yellow dress, and carrying a green rucksack (with a guitar) on her back has to impale a handful of zombies (of the "slower" variety) that campaign for their rights in the Australian forest. Lupita is a dedicated teacher who is taking a group of kids for a nature walk and in a Life Is Beautiful (1997) type of way, who tells them that the walking dead are also day-trippers and to keep on going, nothing is wrong. Shot in New South Wales, this film has already won the Golden Raven award in Brussels.