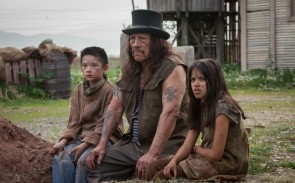 Milev, from Bulgaria, has made 150 commercial ads, 200 music videos and directed the 2013 film, Re-Kill about an anti-zombie patrol. He is back, insurgent, indefinable. The idea is clear: following World War II, the US Government implements a secret project to create the perfect soldier. They must have a limited budget as they do this using pig DNA. The Army Bacon programme OBVIOUSLY does not go to plan. However, Robert Rodriguez's second cousin (none other than Danny Trejo) steps in, trying to help whatever remains of humanity to survive, although he make little more than a cameo in this pork-filled satire. Oh, and the girls are warriors and have moustaches.