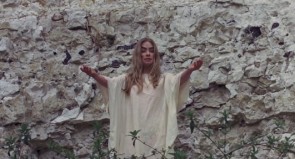 Another movie classic from the folk horror of this era. Evil seems to have reached a small town in the English countryside. It all begins when a farmer finds some human remains and goes to inform the local judge. When he gets there, he discovers that the remains have disappeared, while madness seems to have taken over the place. People are going crazy; while strange events affect everyone form the town. The younger ones, under the orders of the sinister Angel Blake, are dedicated to practice strange rituals that start out as a game and end up with sacrifices of the most innocent.