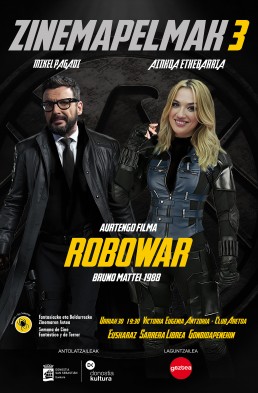 Following the introduction to the Avengers Initiative, the San Sebastián Horror and Fantasy Film Festival promoted the Zinemapelmak Initiative. Mikel Pagadi was asked to bring together a group of superheroes armed with powers to provide an online commentary of the film. This is the third consecutive year that this is taking place and Zinemapelmak is back once again with a powerful challenge on its hands.

Building on the Villabona-Ondarru connection, Mikel Pagadi on the one hand, as well as Ainhoa Etxebarria (her first time appearing in this initiative). Both will be providing a commentary of the film Robowar (1988) with the participation of the audience. Two generations connected through one film. What will happen?

Bring your spirit, energy and passion for fun and enjoy a film that was a hit at videoclubs in our towns and cities once upon a time: a film about muscular warriors and a strange robot, which they will be providing a commentary of! Come along to the cinema and give two thumbs up! And even better, it's free! Go on, Zinemapelmak!