The Horror Film Festival audience, protagonists of the 2019 edition poster 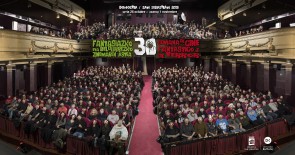 The Horror and Fantasy Film Festival audience features on the poster of its 30th edition, to run from 26 October to 1 November 2019.

The poster was conceived and created by the director Mambrú “El Hombre Ola” and the photographer Asís G. Ayerbe. The final design is by the studio Ytantos.

The picture was taken during the 2018 Festival at the Principal Theatre on the night of Halloween (31 October) and pays tribute to the true protagonists of the festival, its spectators, who year after year faithfully flock to their autumn meeting in the Principal Theatre and other Festival hubs to watch the best fantasy movies of the season and to participate in the Festival celebrations. fiesta.

Browse through the official still