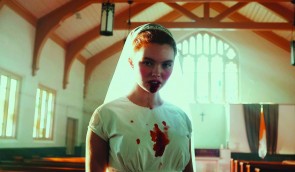 Here you'll find some of the feature films that will participate this year at the Official Selection of the 30th Horror & Fantasy Film Festival, that will take place between October 26 and November 1.

Following a serious accident, David decides to take in and look after his best friend, Javi. However, they are soon at each other's throats, highlighting an embittered and murderous relationship that is closer to madness than the friendship that they apparently maintain. Javier Botet and David Pareja (who also co-wrote the screenplay for the film alongside Óscar Martín) are the main stars of this interpretive duel set in an isolated house in the countryside.

Known for her dark and macabre artwork, young painter Dezzy Donahue is in a rut and can't finish her latest painting. She goes out every night with her friend Courtney to the hippest joints, taking every drug in sight. But one day she is given a new substance and everything changes and she begins to develop a disturbing desire for blood, while also starting to paint again. She wakes up every morning covered in blood, without remembering anything that happened the previous night, while the painting is being completed.

The most outrageous film of the year is from Kazakhstan. During the Third World War, the American government initiates a secret project code named Army Bacon in order to create super soldier by inbreeding human being with pigs. 25 years later, a breed called Muzzles have occupied top of the food chain, eating and farming humans like animals. Rob Justice is an ex-bounty hunter working for the last line of human resistance, the last group of survivors of the race that used to dominate the planet.

This is Scottish actress Pollyanna McIntosh's debut as director in this sequel to the 2011 film The Woman directed by Lucky McKee that she starred in and whose character she is once again playing. A naked teenager turns up at a hospital. Raised in the forest, she cannot speak and she acts like a wild animal. She is sent to a foster home under the supervision of the sinister bishop and his nuns to turn her into a good Christian.

Hideki and Kana are an apparently perfect young couple until one day, Hideki is told in his office that someone is waiting for him at reception. He cannot find anyone there, but a co-worker tells him that the person said that they were called Chisa. This leaves Hideki very shaken, as this is what they are planning to call their daughter and nobody else knows that Kana is pregnant. The strange death of the person who saw Chisa is the first of a series of strange events that will impact the life of the couple from that time on.

Lupita Nyong'o stars in this fun Australian zombie comedy. She plays Miss Caroline, a teacher of a group of kids that she has to take on a trip to a theme park accompanied by a washed up musician, the uncle of one of her students. There they meet the star of a children's television programme and with a group of hungry zombies that they have to fight with all their weapons to survive.

Day is an insecure and poorly paid artistic director who has just finished shooting an ad at an abandoned Olympic swimming pool. In charge of cleaning and draining the six-metre high pool, he first decides to take a nap and falls asleep on an inflatable raft. What he doesn't know is that one of his colleagues has already begun emptying the pool. When Day wakes up, he is in the middle of the pool and can't get out. Furthermore, the only living creature that appears is a crocodile.

The Soska sisters –American Mary (2012), Vendetta (2015)– have directed this remake of David Cronenberg's classic 1977 film with the same title. Rose is a fashion designer who dreams of becoming famous. One day, she is involved in a serious car accident and is left practically unrecognisable. Desperate to regain her appearance, she agrees to undergo experimental stem cell treatment to turn her into a ravishing beauty. She begins to succeed in life and things seem to be going very well, but she soon learns that everything has its price...

Kate and Matt are "almost" a perfect couple. He is an unemployed comic book illustrator while she is tired of her work as a lawyer. In search of a more authentic and healthy life, they leave the City and move into an old house in the countryside. They soon discover a secret hidden room that has the extraordinary power to materialize anything they wish for. They spend days and nights indulging their every desire until finally one day, they ask for the child that they always wanted... Their wishes could very well turn into their worst nightmare.

20 years after the release of The Ring (1998), the film that gave birth to a new genre, known as J-Horror, which is still very much alive, the director of the original film and several of its sequels, Hideo Nakata, and novelist Kôji Suzuki, have come together once again for this film that shows us Sadako's character today. The new story stars young Mayu, a psychologist at a hospital, whose brother has disappeared without a trace. Her search brings her to an island where she will learn the true story of Sadako and her family.

Gemma and Tom want to buy a house to start their life together. They come across an odd estate agent named Martin, who convinces the couple to take a good at a house in a new housing development called Yonder that he suggest visiting together. When they arrive, they discover that the houses are all exactly the same and that the place appears to be uninhabited. Martin shows them house number nine and disappears. Gemma and Tom try to leave Yonder, but get lost every time they try. They always end up back at house number nine.