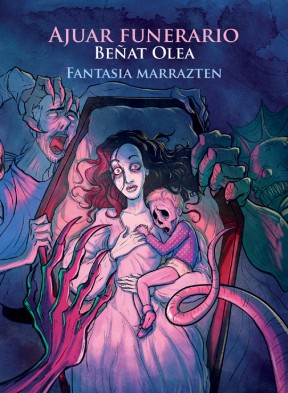 This exhibition, which focuses on the work Ajuar funerario, allows you to travel deep into the core of famed writer Fernando Iwasaki's flash fiction, a book consisting of vignettes produced by screenwriter Imanol Ortiz and cartoonist Beñat Olea. This comic contains 18 short stories that apart from paying tribute to its author, also celebrate the horror genre.

The exhibition is full of images of the dead, children and monsters in an endless array of colours and shades, allowing you to witness the process involved in creating some of their pages, from the initial sketching to the later addition of the ink before the final colouring. This is followed by other works from cartoonist Beñat Olea in an insight of his different illustrations for stories, novels and even video games, in which fantasy is a constant theme.

Following his graduation in Fine Arts from the Leioa campus, he moved to Barcelona to combine his graphic design work with that of freelance illustrator. His illustrations have been featured in international publications (ImagineFX, Graffito Books, Lisbon Labs) and in collective exhibitions at BEC in Barcelona and the Parallax Art Fair in London. He illustrates children's stories, paints commissioned portraits and worked as artistic director on the CrystaizerGames video games indie study. Ajuar funerario is his first foray into the comic strip world.