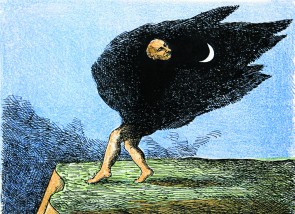 The exhibition The fantastic art of Roland Topor will be open between October 24th and December 8th at Kutxa Kultur Plaza (Tabakalera – 4th floor).

Roland Topor is one of the most personal artists of the French art produced in the second half of the twentieth century. He began his professional career as an illustrator in satirical French publications from the late 50s, such as Bizarre, Harakiri, etc. He met André Breton and ventured to join the surrealist movement but was soon disillusioned by the fact that it had lost its original strength and was limited by vast swathes of rules with which he felt no affinity. As a reaction to said disillusion, in 1962, with his friends Fernando Arrabal, Alejandro Jodorowsky, Jacques Sternberg and Olivier O. Olivier, he founded the now hugely famous Panic Movement, heir to the imagination and talent of the surrealist group and the Dada scene and which, mirroring the festive spirit of the god Pan, brought a breath of fresh air to the French avant garde of the second half of the 20th century, rapidly associating itself to the Parisian underground culture and directly connecting with the events of May '68 in France.

A man of extremely restless mind, Topor applied his fertile imagination to all fields within his reach, enjoying remarkable success in all of them. His literary work was published all over Europe, and his novel The Tenant (1964) became a bestseller in its day, even being adapted to the cinema by Roman Polanski. In films, he participated in the art direction of Federico Fellini's Casanova (1976), playing the part of the "insane Renfield" in Nosferatu (1979) by Werner Herzog and going as far as to carry off the Gran Prix du Jury at the Cannes Festival for the film Fantastic Planet (1973), produced in collaboration with the animator René Laloux.