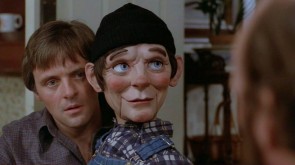 Having lost favour with the audience in recent times, Corky the magician decides to give his career a turnaround and go back to performing in the company of his dummy Fats, with which he had taken his first steps in show business years earlier. His new ventriloquist's number becomes a huge success and he is about to sign a big contract with a TV channel. Somewhat overwhelmed, he decides to spend a few days at a summer resort beside a lake he visited often as a boy. Richard Attenborough directs Anthony Hopkins in this version of a novel written and adapted for the screen by William Goldman.