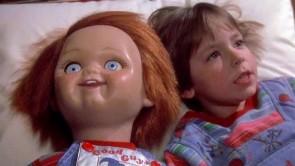 In 1988 Chucky was brought to life by Don Mancini and Tom Holland, launching a saga that has gone on to engender another seven movies in the last thirty years. It all starts when serial killer Charles Lee Ray, the police hot on his heels, practices a voodoo ritual to infuse his innocent-looking doll with his soul. Now turned into a birthday gift for a boy named Andy, the doll sets about wreaking havoc. When Andy says that Chucky has thrown his nanny out of the window, nobody believes him. Years later he will get himself a girlfriend, have a son and continue to do what he likes doing most. But that's another story.